Gainsborough's monthly Farmers' & Craft Market is held on the second Saturday of every month and was relocated to the town centre last year as part of a joint initiative coordinated by Marshalls Yard with West Lindsey District Council.
Previously located on Market Street, the market has now move just a few feet into the Market Place within Gainsborough town centre - just a minutes walk from Marshall's Yard. The additional space within the Market Place will better allow for social distancing ensuring a fully safe shopping environment for both traders and customers. The market offers the best in fresh, local, homemade and handmade produce from a variety of local traders outdoors in the fresh air. For a full list of traders attending the next market please see below: Several years ago I found a pattern for a necklace and bracelet set in a magazine and decided to give it a go.  After making a few pieces for myself and family an old friend from art college, who was already attending craft fairs Suggested I join her at a few events to see how I got on, I enjoyed every minute and you can now find me out and about at fairs most weekends from early February until Christmas Day.

I make a selection of fashion jewellery ranging from earrings at £2 a pair through to chain maille sets at prices to suit most pockets.  Alongside the jewellery I make other beaded items including bookmarks, scarf rings and brooches.

The name Curly Nook came from the cottage where my mother lived as a child in a local Lincolnshire village.

I look forward to meeting customers old and new.

Also available at the Yard every Tuesday 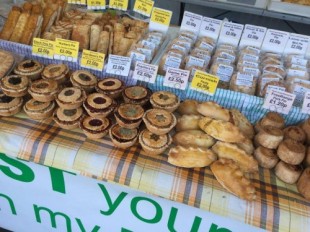 The aim of Kevin's pies is simple, to make the best tasting pie from quality ingredients you can trust and sell them at a fair price.

We believe that great tasting pies come from simply using quality fresh ingredients and cooked properly which is what we do.

We don't cut corners with our pies. No artificial colourings, flavourings or preservatives - just pies the way they should be.

Everything we make be it quiches - tarts - pasties - rolls we make with the same passion and to the same standard. At our farm, just 5 miles from Marshalls Yard, our animals are farmed to the highest welfare standards with everything they need for a natural, stress free life.  Our ethos is to commit the extra time, effort and skill needed to produce products of quality and by hand producing everything attention to detail is given at each stage; from the farming through to our on-farm butchery, bakery and smoke-house. Since Sophie turned her passion and hobby into a full fledged business, her family have joined in helping to grow the company. They are delighted with the support they have received and love seeing lots of new and regular customers. Inspired by iconic desserts and vintage confectionery from around the world. The luxurious array of artisan tea blends by SaChasi are specially made to not only deliver a truly unique aromatic taste, but also be extraordinarily nourishing to the skin. This is courtesy of a nutrient-rich base, curated entirely from nature's finest plants & exotic superfoods.

Succumb to a guilt-free temptation and experience utter ambrosia with every single sumptuous sip.

✾ Made with Only Natural, Organic & Ethically Sourced Ingredients

✾ Handmade in the UK A baker selling 12 different lines so theres always something for everyone. Sarah also sells a good selection of sweets and lollipops. 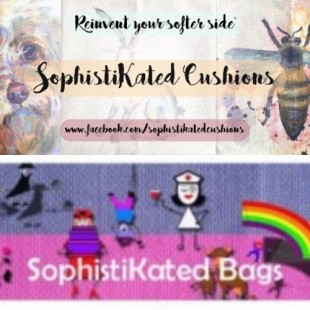 SophistiKated Bags & Cushions sell linen cushion covers and jute shopping bags made from environmentally friendly jute, which means that as well as not using plastic shopping bags, no pesticides are used either! And whats more, the standard good bags are lined inside to make them water resistant.

Perfect bags for all the family!

Kate is the Lincolnshire representative for the Lake District Company The Good Bag Company and sells jute shopping bags at events throughout Lincolnshire and Nottinghamshire. Rick from The Fishcake Company provides a variety of freshly made fishcakes to take home. The man from Skidby

Hi. I am a chainsaw carver and my name is John Pattison, also known as The Man From Skidby.

I have been a full time Carver for 7years. I carve many things from owls, bears, people's dogs, to male and female figures.

I was taught to carve with hammer and chisel when I was sixteen but it wasn't until I was sixty that I started carving with chainsaws.

I do a few events and markets and I also do the Linclonshire Show with four other carvers.

Last year, I did 38 sculptures for a large holiday leisure Parks company, that is at the Centre of things but I am not allowed to name them.

Some of my carvings can be seen and bought from Sarah Cranmer at Toffs, The Old Forge Florists, Uncle Henry's, Grayingham. Hayley is 25 and from Tuxford. Hayley opened her business as a Crochet Artist, launching her own Crochet Clubs subscription box service in 2018. now a stockist of King Cole yarns she is able to offer a variety of real wool and vegan alternative yarn, colour packs and crochet kits!